If we do not live another day, then say this over our Pyre:
We died like Rifles with our Faces to the Fire 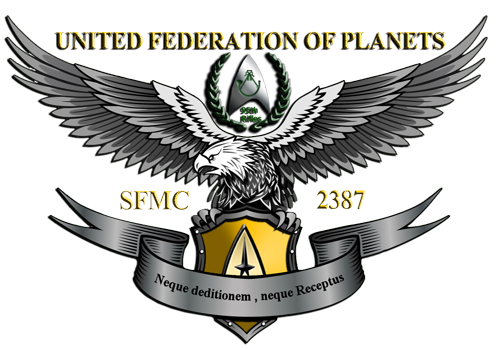 MOTTO: NO SURRENDER, NO RETREAT Est 2387

The origins of the 95th Rifles Regiment was the 1800's AD before the Napoleonic Wars of that time, they were the first Regiment to sports Green Uniforms and thus became known as the Green Jackets. Back then they used the Baker Rifle and as time went on they were merged with other regiments and the name 95th was all but relegated to the history books and their Regimental Colours and standards were cased the 95th Rifles was also the only known 19th Century British Regiment to use the White Cord rating. Around 2388 a then Commander had an idea, shortly after she transferred to SFMC and upon making Colonel she re-christened the 95th Rifle Regiment, while currently not as big as its forebearer the revitalized 95th is building to Regimental level, currently, they are known just as the 95th Rifles, all the marines on the USS Tomcat are 95th Rifles, but as they are Captain Somers project they will leave the ship when she does.

The USS Tomcat is an Akira Class ship, with a slight difference, while its armaments and defences remain standard to some extent its evacuation capacity has been lowered to account for the extra fighter squadrons and Marines. The ship is commanded by an EX-Marine former Colonel turned Fleet Officer Captain Jasmine Somers, her missions are different from other standard missions due to the load-out and set-up of her crew and equipment.

So come join the Tomcat Crew as they head out to the less explored regions of Federation Space in an attempt to stop the Hostile and Rogue Intelligence Agencies and other undesirables on the fringes of known space.

In the posts, Journey Home Part 3 - The Ceremony #1 and Journey Home Part 3 - The Ceremony #2 the sim recognised 5 players for their contributions to the mission and to the sim. One of those promoted had in a previous mission post be notified that they were the new First Officer, so I would like to acknowledge the following Officers for their dedication and participation in the Phase 2 Mission, the names are as follows:

Ensign Ted Silver - Assistant Chief Science Officer to Lieutenant Jg also received a host of Awards for how he handled himself on the Away mission he commanded.

Congratulations to all those who got promoted and awards (not mentioned in detail), it is people like these that makes a ship commander proud to serve with such talented simmers.

Okay here are some Mid mission shoutouts for the Science Away Team for the Phase 2 Mission Incidental Post they done and some shinies, this is after getting progress assessments from a senior trusted member of the sim and the Away Team Leader itself, so starting off I would like to give acknowledgement to the following Most of these Awards are Tomcat Site based:-

Ensign Silver did very well on his first time leading an Away Team Mission, he proved himself a strong and active leader and a team player who led his team well and retained control of the situations and challenges by his away team members threw at him and was praised by other members of his team for his ability, Lieutenant Remington Dodd was simming two PNPCs on Ensign Silvers Away Team to offer the advice and support should it be needed as Ensign Silver was nervous about leading his first Away Mission and I am pleased to hear he has done well and I hope he has more confidence in himself after a successful Away Mission that he led.

Ensign Thyra Sh'shraaqir, also did very well in the Away Mission and assisted and participated with others and assisted with the events of the away mission and set herself up for further interaction benefits to the crew that was on the mission with her she also had a firm presence on the mission.

Lieutenant Patrick Jackson despite his Real life schedule presented himself well and contributed significantly to the Away Mission and was a strong presence during it and it has been said that others on the Away Team would do a joint post with him again, should one be done.

Lieutenant Donovan did well in the Away Mission and helped to keep the action moving along when the team was on the shuttle, while her participation was limited due to her assigned duty she did well for what she had at the time and simmed her PNPC well.

Okay, the Awards for the Science Away Team is as follows three of these awards were also on the PF IFS and Awarded there, I also have them on the site and all awards will be added to those who got them by days end.

The PNPC Character Bio cannot be given Awards so these awards will be on Lt Donovan's Bio with a note added.

I would like to give a shout out and a big congratulations to Ensign Ted Silver and Ensign Thyra Sh'shraaqir for getting the Fleets Post of the Month for April 2021 it was well deserved and I am happy for them, it shows what players can do when a post wins an award.

I have updated their Bios with shinies.

Once again congratulations to both Ensigns.

I hope you have all had a great Christmas and new year?

Now it is the New Year 2020 it is time we got things moving again, as you all know we have a Ceremonies post going, it is Mandatory for ALL Playing Characters I know some are away till about the 10th of January 2020, but still, this award is NOT an In Character Award, it is an Out Of Character Award and this year two Simmers have earned the BARCLAY RIBBON.

The Barclay Ribbon is awarded to Simmers who have improved in their simming content since joining the USS Tomcat, so without further Ado, I am proud to announce the following simmers have earned the Barclay Ribbon which is an OOC Award are:

Congratulations to both of you, I would like to see more.

As Commander of an RPG simulation, there is nothing more rewarding than handing out rewards and achievements to those who have earned them, on the USS Tomcat there are two automatic Awards given, one is for the PC Marines the other for ALL crew. This one that is to be given is for the Six Month Tour of Duty Award, which for two people are overdue the third is due on the 22nd of this month but to save seperate Announement on that day the third simmer will get his award this day along with the other two.

So without further to do I am proud to announce the following three Tomcat Officers who have survived their 6 Month Tour of Duty, they are:

Lieutenant Parker's Award is officially due on the 22nd of this month, but like his two peers his Bio will show his 6 month Award today.

Mazal was feeling out of sorts, she felt off balance, and not quite herself. She had been noticing that something that wouldn't normally irritate her did. She even felt like her heart would pick up speed, as if having an adrenaline rush when not being active, to warrant that.…

Samantha Smithson was working in her office when an alert popped up, she called it up and swore under her breath, quickly pulling up the required file she left her office and headed straight to the Arrival/Departure lounge. It took a short time to get there, but as she…

Paul had been seen by the Captain and her Sister an hour ago or maybe longer as he had spent time talking with his wife before heading down here, that he was moving back to flight along with his demotion to Lieutenant Jg.he. For not disobeying orders from a…

A young woman with auburn hair stood waiting for the arrival of the USS Tomcat, in a not too populated part of DS51. Where she stood the lights were low, low enough for her to view the stars, the brightness of them against the black velvet of space. In…

Dr Jane Sinclair was on sickbay duty as the USS Tomcat approached Starbase 51. In fact, most of the medical crew were online. In part because docking was a slightly more dangerous procedure and having an emergency crew on hand was logical, but also because the last few things…

“Entry 0401-4 Encrypt. Leland L4.” Hawksley leaned back to the sofa. Seated beside him was Hercules.

He toyed with the remote, watching the latest Federation Football Game. Lilliana had…

*Siiiiigh*. It feels so good to be clean again.

The state the Captain was in...they were just letting her fester in dirt and filth. And the temperature...at least she had no risk of hypothermia. If we hadn't arrived when we did though... the humanoid…

Well, that was the most intense experience of my life. I'm glad we saved the Captain, but my goodness I hope to never have to do that again.

I'm thankful that I didn't need to fire my phaser. Don't get me wrong, I…

» Report of the Deputy CMO

Mission success. Fleet Captain Jasmine Somers is alive and back aboard the ship. The surgical time was ten hours and twenty-two minutes. I relieved the rest of my staff as we were finishing up; the new shift took over getting the Captain…

The away team has been aboard the Type 9 shuttle SS Leonidas traveling at warp 5 for over two weeks heading for the unexplored region in the southernmost region of what the locals call the Prydon Cascade. Our orders are to explore System 569710.…